The Best Evolv Climbing Shoes in 2022

My top five Evolv shoes for every style of climbing. 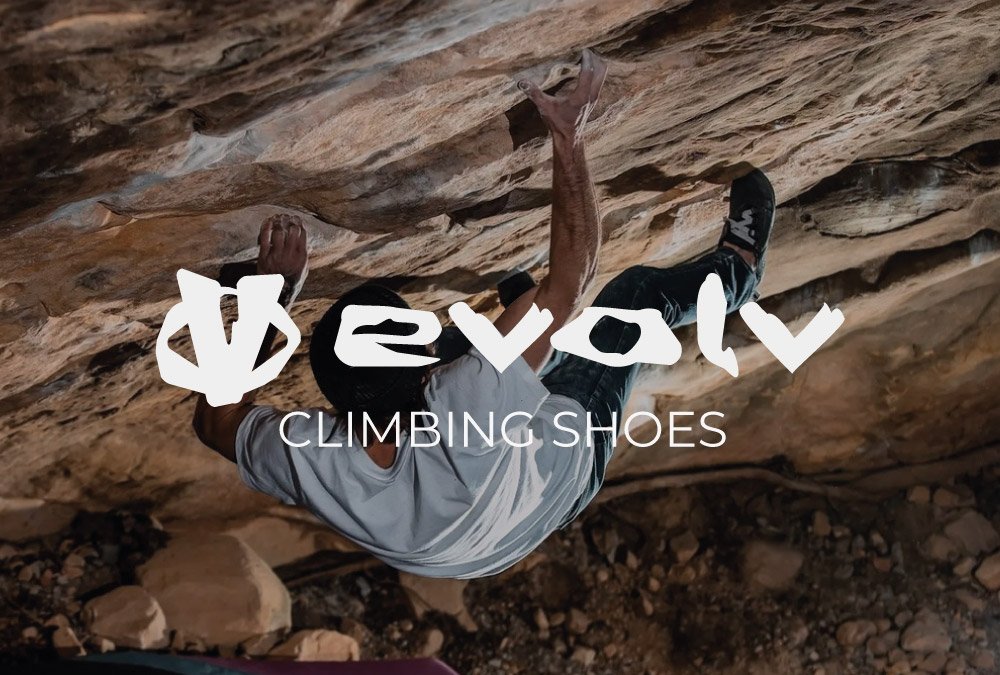 With Evolv climbing shoes becoming increasingly favored by professional climbers and weekend warriors alike, this American-made company has become one of the hottest manufacturers in the climbing shoe world. Headquartered in Buena Park, 30km south of Los Angeles, the company has come a long way from its humble beginnings.

Evolv came to life in 2003 at the hands of Brian Chung, an amateur climber dedicated to his dream of making the best climbing shoes in the US. Early shoe lines like the Kaos and Bandit were all handcrafted in a 500-square-foot garage, by both Brian and his fellow business partner.

Alongside an impressive array of climbing shoes, the company has also built a formidable team of athlete ambassadors. Their continuously growing team of talented athletes includes Daniel Woods, Alex Johnson, Colin Duffy, Ashima Shiraishi, Steph Davis, and Paul Robinson. Even one of the biggest names in the climbing world, Chris Sharma, held a position as a shoe designer at Evolv between 2006 and 2016 and played a pivotal role in developing several award-winning models of climbing shoes.

It’s not just a thriving network of sponsored athletes that have made turned heads though. Evolv has forged a reputation for producing robust and high-quality climbing shoes for climbers of all abilities. They also have one of the most extensive ranges of vegan-friendly shoes of any manufacturer, with over 60% of their shoe offerings using vegan-friendly materials and glues.

So if you are a fan of this American manufacturer, but are unsure which of their 23 shoes is right for you, then allow me to shed some light on, what I think, are five of the best Evolv climbing shoes currently available in 2022.

Evolv has a continuously evolving shoe range jam-packed with brilliant designs. Here are are few of my personal favorites. 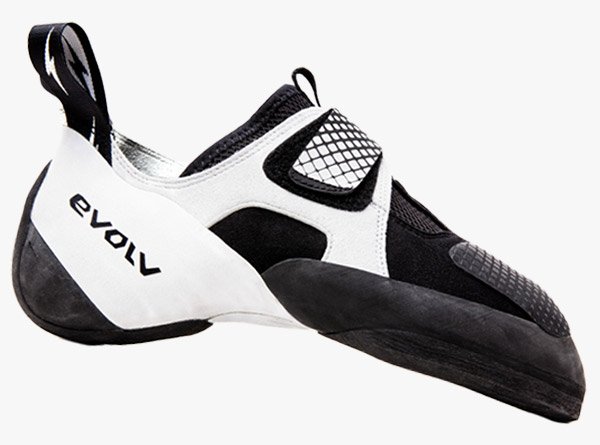 A relatively new addition to the Evolv line, the Zenist hit the shelves in February 2021. This super-soft shoe was designed for the single-minded purpose of crushing hard on indoor walls.

So what makes the Zensit best suited to indoor climbing? The rubber (as opposed to plastic) 1mm midsole makes the shoe considerably more flexible – and sensitive – than other shoes in the Evolv line-up. This super soft midsole makes smearing on large volumes and slabs a breeze and excels in situations where climbers need to feel precise footholds.

While softer shoes will always offer less under-foot support than their stiffer counterpart the Zenist doesn’t completely forsake its edging ability. The aggressive camber, highly tensioned spilt-sole, and the 4.2mm of Trax rubber all work together to generate some additional support and allow the shoe to retain some of its edging ability. The pointed toe box pulls well on pockets and makes these shoes great for bouldering or steep overhanging routes.

Despite being unlined, the certified-vegan synthetic upper doesn’t stretch much. This medium-volume shoe won’t be too comfortable for long days but will suit short routes at the crag and gym walls. 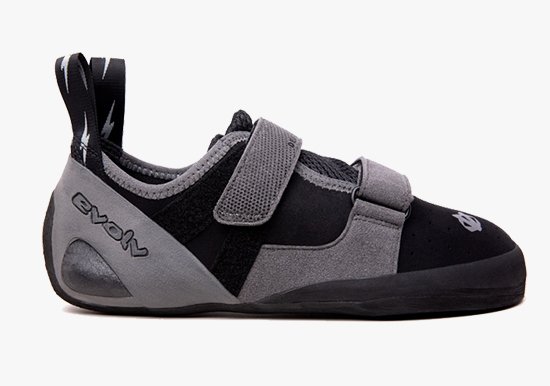 If you are looking for a beginner-friendly shoe that will help you hone your climbing technique then look no further than the Defy.

The Evolv Defy is made for beginners looking for an entry-level shoe that won’t break the bank. This is one of Evolv’s longest-standing shoe models and is one of the most popular beginner climbing shoes ever made thanks to a combination of quality construction, respectable performance, and attractive price point.

The beginner-friendly shape of the Defy delivers bucket-loads of comfort thanks to the neutral shape, padded tongue, and relaxed velcro closure, making long climbing sessions at the gym or local relatively pain-free.

Thanks to the full-length 1.4mm midsole, there’s plenty of support for beginners who haven’t yet built up the strength in their toes, and the Trax SAS rubber offers plenty of friction for smearing and foot jamming. The Defy lacks many of the technical specs you will find on a performance shoe so it isn’t the best for steep, challenging problems or technical face climbs. Nevertheless, the Defy is still an excellent choice for beginners that want an affordable shoe that they can rip up before learning more precise footwork. 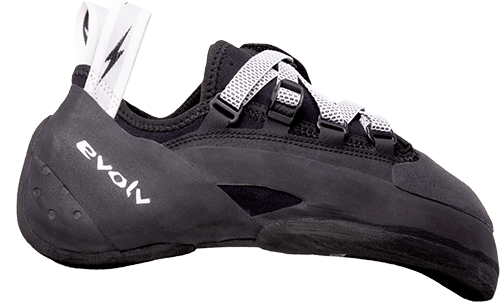 The highly coveted Evolv Phantom has fast become recognized as one of the best bouldering shoes money can buy. The shoe quickly gained a reputation as a world-class bouldering shoe after Daniel Woods claimed the second ever ascent of a V17 boulder in these shoes in April 2021.

The Phantom has also won over the hearts of legions of amateur climbers too thanks to the clever tech Evolv has jam-packed into the shoe. Unique features like it highly downturned shape allow for unrivaled pocket pulling ability, while the clever 6-point closure allows for amazing fit customization.

Interestingly, the Phantom uses not one but two midsole to help offer an additional performance boost. The first midsole, the AVT (abridged variable thickness), floats under the forefoot, tapering in thickness towards the edges of the shoe and cut-out under the big toe. This clever midsole design ultimately offers the support you require to stand on barely-there footholds, whilst maximizing the sensitivity and power of the shoe.

The second midsole, the TPS (Tension Power System) pulls the forefoot from three different points and channels it into the downturned power position, assisting in keeping the cambered shape of the shoe throughout its life.

The Phantom has a huge amount of rubber covering the toe rand, allowing for excellent hooking. The same goes for the heel cup, which sees a ‘dark spine’ protrude up the back of the heel, creating one of the most confidence inspiring heel designs I have ever tested.

The padded split tongue makes the Phantom pretty comfortable for extended training sessions, but you wouldn’t be taking these shoes up long trad days anytime soon. 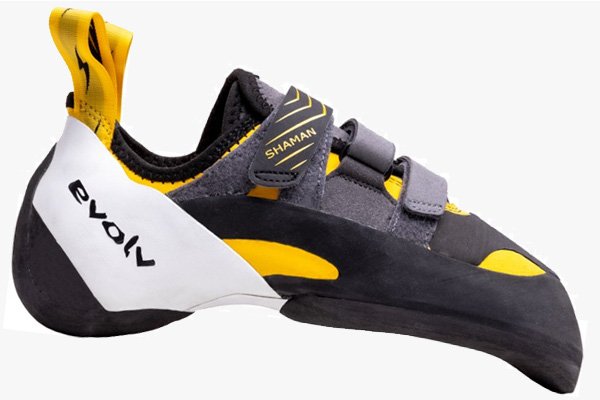 If you are looking for the ultimate Evolv sport climbing all-rounder, then there’s only one shoe for the job: the Shaman. The Evolv Shaman was designed by the legendary Chris Sharma in 2011 and to this day is still a regular sight at gyms and crags across the world.

In 2016, the Shamans got an upgrade with a better-fitting heel cup, a bigger toe rand, and more spaced velcro straps. Again, in early 2022, Evolv delighted us with an updated Shaman, with the biggest changes coming in the form of an updated color scheme, a microfibre tongue, and a lace variation.

For a high-performance shoe, the split tongue and triple velcro closure make the Shamans surprisingly comfortable. They are moderately stiff, and pretty downtunred so don’t smear very well. They’ll suit climbers of all levels that want a quality yet comfortable shoe for bouldering and sport routes. 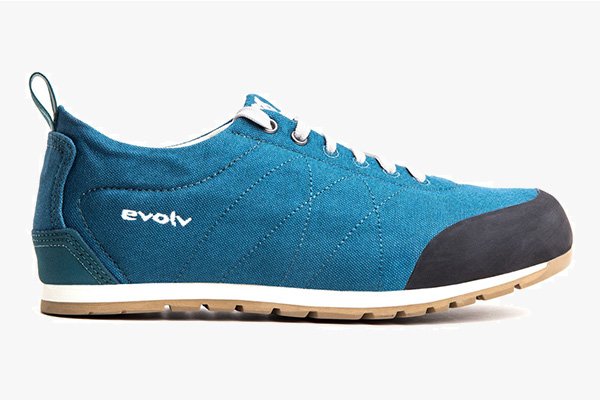 If you are planning on becoming a regular at your local crag, then you are going to need a reliable pair of approach shoes to get you there. Lucky for you, the Evolv Cruzer Psyche is one of the most lightweight, affordable approach shoes money can buy.

The cotton canvas upper is padded for increased comfort, while the generous rubber rand protects the foot from rocks and scrambles.

You wouldn’t be scrambling for hours with these shoes, but they make an excellent and affordable companion that takes you to and from the crag or boulders. Weighing only 1lb 4oz, they can easily be brought up multi-pitches for the walk-off.

Started in 2003 by founder Brian Chung, Evolv was acquired in 2019 by Italian company Oberalp Group. In addition to Evolv, the Oberalp Group owns several mountain brands such as Salewa, Wild Country, and Dynafit.

Most of Evolv’s shoes are certified vegan. In 2005, PETA awarded Evolv a “Proggy award” for being the best cruelty-free outdoor shoe company.

Many Evolv climbing shoes are designed to be unisex. The size guide for Evolv follows the US street shoe sizes. That said, Evolv shoes are renowned for running small, so be prepared to upsize your climbing shoes. I find the perfect size is usually 1/1.5 EU sizes larger than my street shoe.

If you aren’t sure of your size or feel like you are in-between sizes, order two pairs and return the unwanted shoes in good condition. Evolv encourages this and has a free return policy within 30 days! 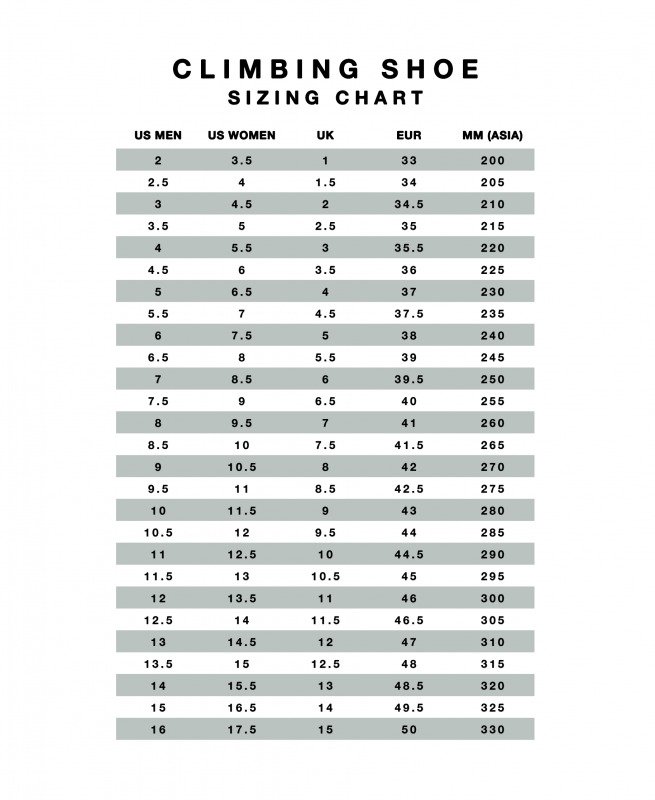 Many Evolv climbing shoes are designed to be unisex. The size guide for Evolv follows the US street shoe sizes. That said, Evolv shoes are renowned for running small, so be prepared to upsize your climbing shoes. I find the perfect size is usually 1/1.5 EU sizes larger than my street shoe.

If you aren’t sure of your size or feel like you are in-between sizes, order two pairs and return the unwanted shoes in good condition. Evolv encourages this and has a free return policy within 30 days!

END_OF_DOCUMENT_TOKEN_TO_BE_REPLACED 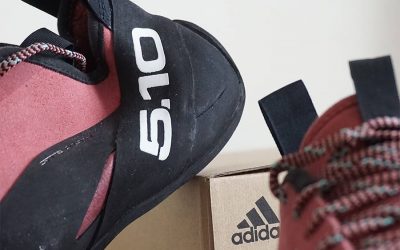