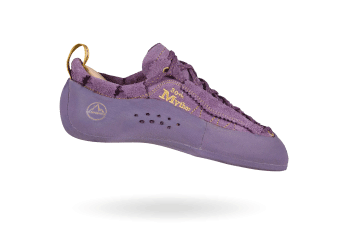 A legendary shoe design that delivers all day comfort. Perfect for trad climbing. 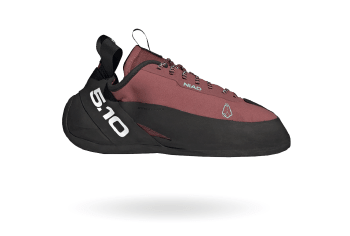 The next-gen upgrade of the most popular pink climbing shoe ever. 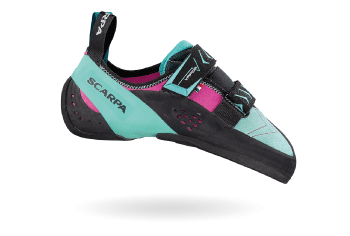 A moderate shoe with impressive all around performance and comfort.

I can’t tell you why, but for some reason, mountain sports and luminous colors go together like bread and butter.

When you look back at the golden years of rock climbing (I’m talking pre-2000 era) ridiculously bright spandex and jazzy climbing shoes were all the range. Of all the ludicrously bright colors however, pink was perhaps the hottest color of choice, with many of the first ‘modern climbing shoes’ opting for a pink palette. Many ground-breaking shoes from Boreal, La Sportiva and Five Ten all used shades of pink.

While shoe technology dramatically increased since these early models, many of today’s climbing shoes still use bright colors in homage to their predecessors. In honour of the climbing shoes of yesteryear here are, what we believe, are the five best pink climbing shoes currently available, based on our extensive testing and research. 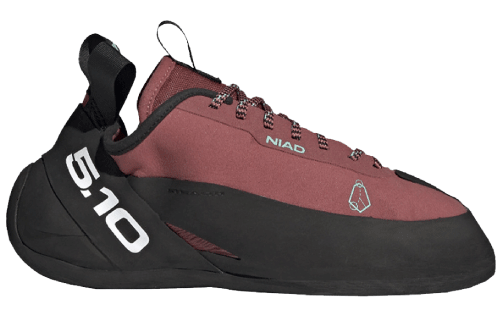 It’s only right that we start this list off with the NIAD Lace. This shoe is the predecessor of the most popular pink climbing shoe ever, the Anasazi lace. The Anasazi Lace was so well known throughout the climbing community they were simply referred to as the ‘Pinks’.

The Pinks were originally released in the early ‘90s, a time when Five Ten were taking the climbing world by storm. For decades, the Pinks were a global powerhouse. Partly because of their unrivalled glove-like fit,  partly because of Five Ten’s famous Stealth Rubber, these shoes were a force to be reckoned with.

Although the ‘Pinks’ were discontinued in 2020, the next-generation NIAD Lace was introduced to fill the hole that was left behind.

The NIAD Lace builds on the winning features of its predecessor, with a few new upgrades to keep up with the demands of modern sport climbing.  The most obvious of which is the toe patch, which now extends further up the forefoot for superior toe hooking ability. The upper is also now made from lined synthetic material, which helps with comfort straight out of the box.

Another nice addition is the breathable mesh on the tongue, which helps stop your feet from overheating, a common problem for synthetic climbing shoes. 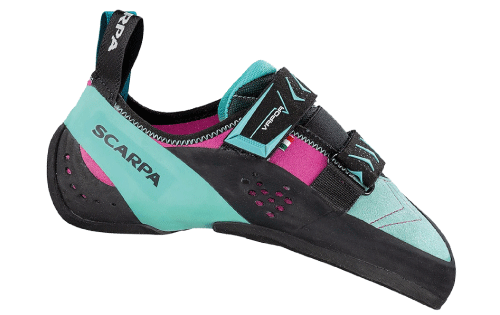 Most serious climbers will invest in multiple pairs of climbing shoes, as there isn’t really anyone shoe that excels on every type of climbing terrain. That said, If you aren’t ready to spend a small fortune on climbing kicks just yet, then the Vapour V is one of the best ‘all arounders’ currently available.

The Vapour V is a moderate climbing shoe with a slight asymmetric and downturned profile. This design gives the shoe the best of both worlds. It can handle the overhung territory where aggressive shoes traditionally excel, while still delivering precision edging and smearing ability on slab and vertical routes.

The women’s version makes the most of Vibram’s XS Edge, a slightly harder compound than the male’s XS Grip 2. While it might not feel as sticky as its softer counterpart, as the name suggests, this harder compound will deliver superior edging ability, as well as be slightly more durable. 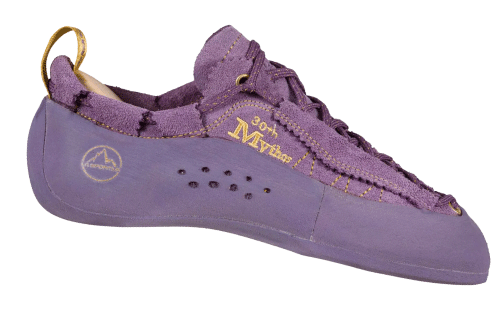 Okay, so the La Sportiva Mythos 30th Anniversary Edition is technically lilac (and is also on our list of purple climbing shoes) but this ionic shoe is certainly worthy of mention here.

The Mythos is a time-tested classic that out-dates even the Anasazi Lace, having first been released in 1991. In fact, it has been around so long that it might be the oldest climbing shoe currently still in production.

Don’t get me wrong, this shoe is certainly no dinosaur. The reason why the Mythos has managed to stick around for so long is because of the revolutionary innovations it brought to the table.

The laces wrap around the back of your foot, creating tension in the heel, something that was a completely new concept at the time. While there aren’t many modern shoes that use this design, it can be found on some of the most popular kids climbing shoes, as it maintains tension without putting unnecessary pressure on their feet.

When this shoe was first released, the Mythos was favored as a popular sport climbing shoe, although now it is used more for trad and big-wall climbing shoes, where comfort takes priority over performance. 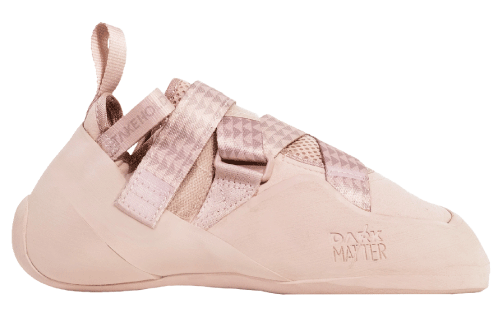 Are you looking for a pair of shoes that bring some style to the table? If so, there’s only one shoe that you need to know about, the Momoa Pro.

As you might have guessed, this is the signature shoe of Hollywood super-celeb Jason Momoa. Aquaman teamed up with So iLL in 2018 to announce the On The Roam x So iLL collaboration, which amongst other climbing and streetwear apparel, included his very own pair of signature climbing shoes.

The Momoa Pro comes in both high and low volume variations, so there’s something for every shape of foot. The shoe is constructed on a neutral last and a stiff midsole which, paired with the tensioned heel, allows the shoe to excel at edging and precision footwork.

The one strap closure is similar to closures found on other performance shoes, like the La Sportiva Solution and Tenaya Iati, which allows for a more customized fit that help eliminate dead spots inside the shoe.

You can also grab an awesome pink chalk bag to match! 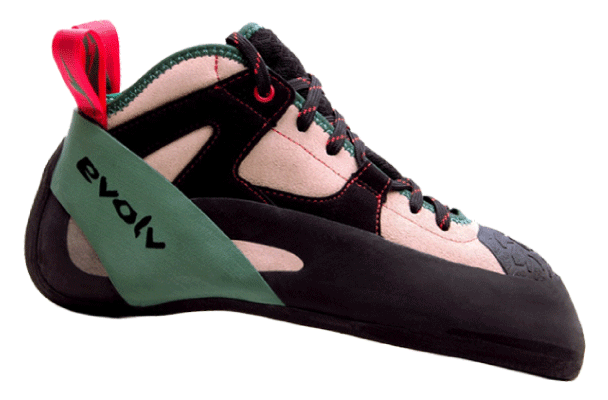 If you are partial to a bit of crack climbing, then you should take a look at The General. In a world where the La Sportiva TC Pro reigns supreme, the General makes for an interesting alternative to La Sportiva popular pick.

This high top climbing shoe uses a slightly more cambered last than the TC pro, giving the shoe a more precise toe box to play with. The toe patch is also considerably bigger than other high-top alternatives, which is helpful when cramming your toes into finger cracks. Like a lot of Evolv’s performance shoes, The General uses a variable thickness rand (VTR) across the toe box. The thicker rubber in high-wear areas helps increase the durability and lifespan of the shoe, while still providing sensitivity in the areas that matter.

The shoes utilizes their Trax XE rubber compound, a stiffer alternative to their widely used Trax SAS. This helps with the shoes’ stiff characteristics and superior edging ability.

What are your favorite pink climbing shoes?

While there might not be the same selection of luminous pink climbing shoes like there used to be, there are still plenty of brilliant shoes out there in your favorite color.

If you are looking for a shoe that can do it all, then the Five Ten NIAD Lace or the Scarpa Vapor V are great choices. If you want something more specialized, for trad and crack climbing for example, then Evolv’s The General and La Sportiva Mythos are certainly worthy of a look.