Chosen by our slab-loving professionals
" 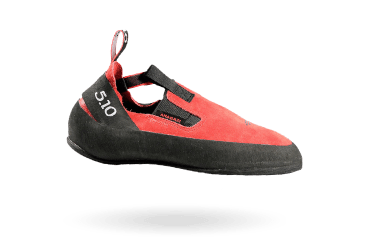 A legendry slab shoe, with a surprisingly small price tag. 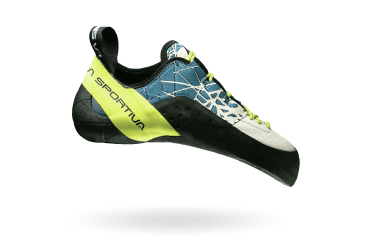 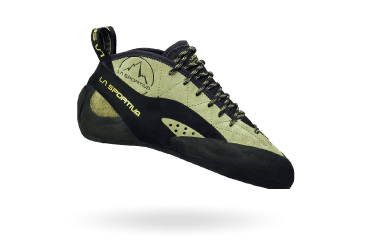 One of the most reliable big-wall climbing shoes in the biz.

Slab: loved by some, hated by many. The truth about slab is that it comes in all shapes and sizes. Low angle friction slab, vertical edging, competition coordination and much more. Are you planning on a full day of moderate multipitch? Or a hard red point send?

In order to bag those super-slopers you need a shoe that can unleash your superhuman smearing skills.

Technically, the best slab climbing shoe depends on what type of rock you are climbing. If you are on hard rock like granite or slate, you are going to want a hard rubber shoe that is stiff enough to edge on the smallest flakes and micro-formations.

If you are climbing on a soft rock, like a crumbling sandstone or a polished limestone route, you will want a softer rubber shoe that smears on that slab like freshly laid tar.

Of course, for many of us, having an endless selection of climbing shoes to tackle every project is a fantasy. Luckily, there are plenty of good slab climbing shoes that can give you the best of both worlds.

What makes for a secure smear or the ultimate edging experience? Let’s take a look! 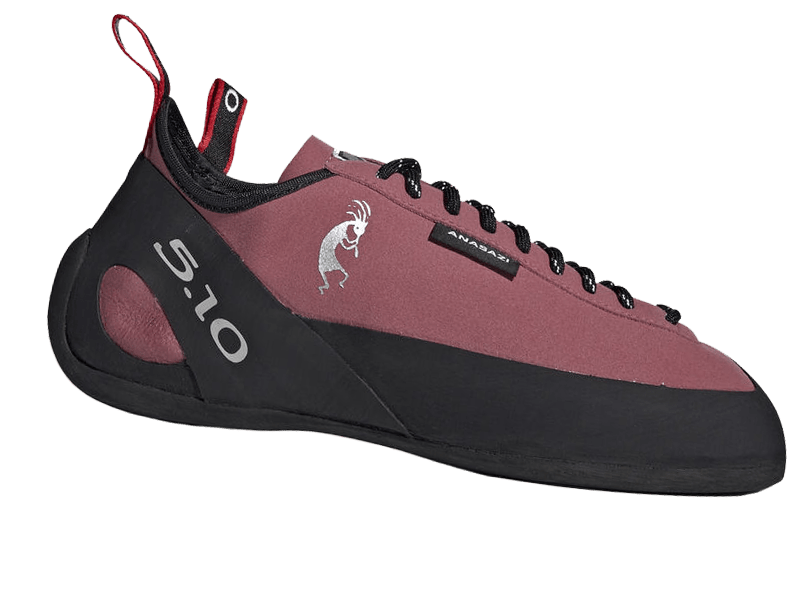 The Five Ten Anasazi Lace, affectionately known as ‘The Pinks’, are a real classic when it comes to technical climbing. They were briefly discontinued but, to our relief, they are now back on the market with a refreshed design. They are a big it on the British gritstone scene and loved by many climbers, especially the vert and slab fiends.

The Pinks consist of an asymmetrical last and high tensioned rand wrapping around the heel. With an exaggerated toe, this shoe really shines when edging on small, almost non-existent holds. Meanwhile, the stiff sole provides much needed support on long slabby routes and razor edges. The Anasazi comes equipped with the awesome Five Ten C4 rubber, some of the best on the market when it comes to sticking to the wall.

SIZE: The Pinks can be sized either to your normal street shoe pretty comfortably. Keep in mind they are made of a synthetic material and will not stretch.

All that said, the Pinks are a polarizing shoe. Even when they fit your foot perfectly, they still won’t be the comfiest pair of climbing shoes you will ever own. The high tensioned rand is known to sharply dig into the back of the heel. 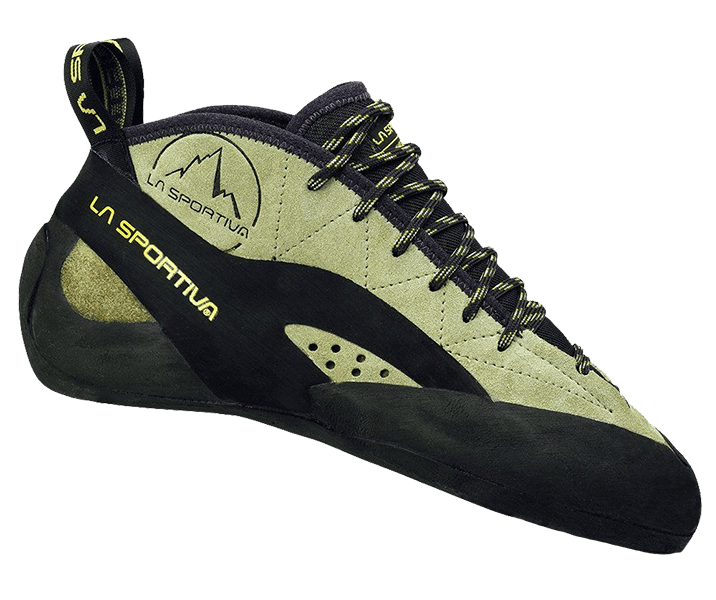 If expansive, endless slabs, doted with sections of crack are your thing, than take a look at the TC Pros (if you haven’t already). The shoe’s namesake is none other than technical climber extraordinaire, Tommy Caldwell  and were used by both Tommy and Kevin Jorgeson on their famous Dawn Wall project.

The TC Pro’s edging ability relies on the shoe’s stiff sole and slight asymmetry. They feature a flat last profile which maintains a high degree of comfort. Even after a long day on vertical and slabby terrain, these shoes will leave your feet happy – or at least, not leave you screaming in pain after every pitch.

SIZE: These shoes can be size about a full size down from street shoe size, though this may vary depending on personal preference and foot shape. They will stretch about a half size.

These shoes are the Rolls Royce of climbing shoes; their  price tag will make you wince, more so than any other climbing shoe on the market. For the die hard big-wall climber though, they are a must have in your climbing shoe arsenal. 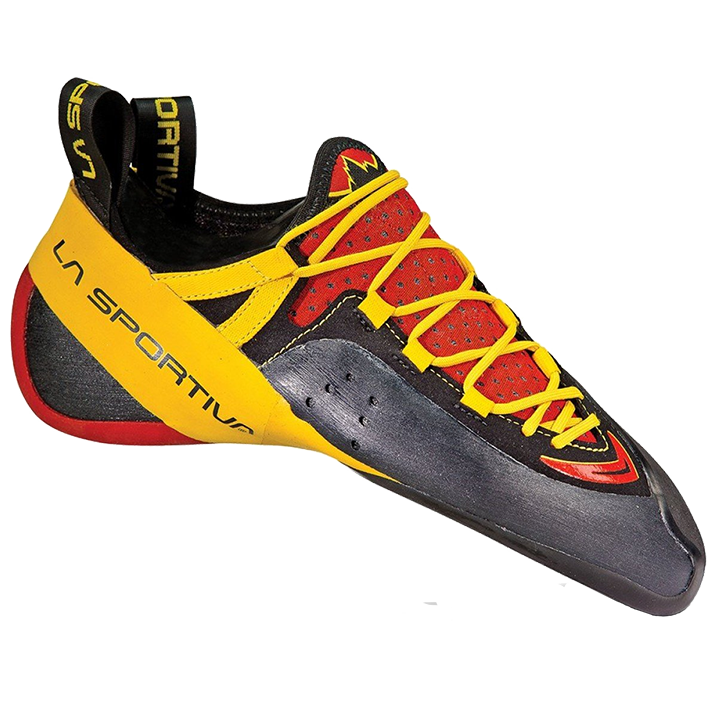 Forget everything you know and understand about climbing shoe construction. These shoes have been touted as a game changer, and boy, are they making a splash.

It’s La Sportiva’s ‘no edge technology‘ that make the Genius unique. The rounded toe would seem wacky as compared to traditional climbing shoe technology, but this is more than just a gimmick. Accompanied by a soft, supple sole, the genius offers ultimate sensitivity and comfort. This is in complete contrast to a shoe such as the Pinks which replies on a stiff sole and straight crisp edge.

This shoe performs exceptionally well on indoor slab where volume smearing is in abundance. To our surprise, they continue to perform just as well outside on small edges and our slabby projects – making them a true jack of all trades. That said, the Genius is certainly a performance shoe that should be brought out for the harder projects and not really used for running laps at the gym.

SIZE: This shoe should be sized down by at least a full size from street size. They will stretch minimally, less than a half size. Be warned, the Genius’ do take time to get used to. However, this is a new-school shoe old-school climbers may just learn to love if given the chance.

If you are looking for a Velcro version check out the La Sportiva Futuras. They offer a quick on and off solution, and are also available in a woman’s specific fit. 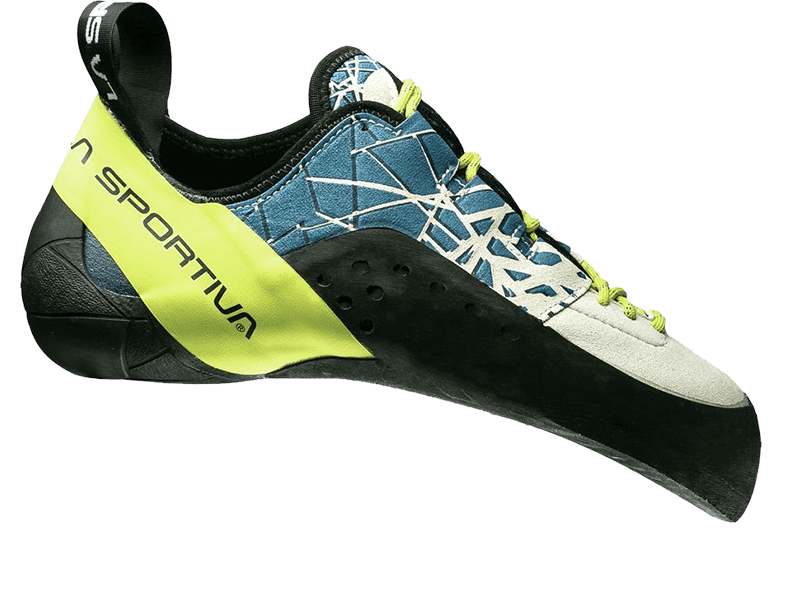 By combining the front lacing system and sock lining of the Katana with the heel and aggressive profile of the Otaki, La Sportiva have concocted the Kataki. These features have made the Kataki a favourite of my slab loving friends, especially when it comes micro-edges and technical slab on hard rock like granite.

The Kataki features a slightly more downturned and asymmetrical profile when compared to the Katana, improving the lazer-precision on an already highly precise shoe. Additionally, the Kataki has a slightly softer construction than the Katana. When it comes to slab, this shoes slightly downturned profile excels when edging and but still manages to give you plenty of confidence when smearing.

SIZE: The Katakis’ should be sized about a size down from street shoe size. You can expect them to stretch almost a half size throughout their life.

The Kataki is a high-end shoe for hard-core climbers who like to get on a bit of everything. It excels at almost everything, including slab. It’ll keep you dancing up those technical faces with ease.

Unlike the Katana, the Kataki is available in a women’s version. Check them out if you are looking for a lower volume and narrower fit. 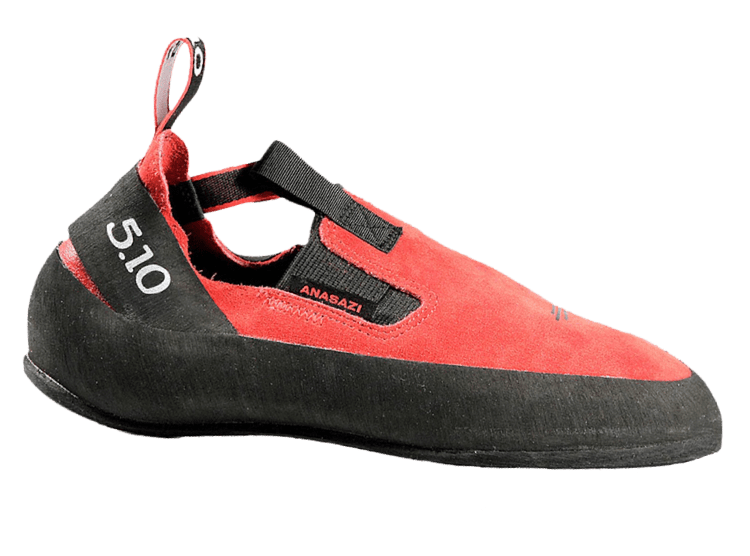 The Five Ten Moccasym fulfil a specific role in the climbing shoe world. They are the quintessential slipper shoe offering maximum comfort for long days on slab and crack. Unlike the TC Pros, they won’t hurt your bank account.

The Moccasym’s construction is very bare bones and simplistic. As the name indicates they have an asymmetrical last allowing for toeing into divots and pockets. On slab, their strength comes from the super sticky C4 rubber and general sensitivity. You’ll be able to feel the smallest of micro edges and features, making them great for moderately graded granite slab.

SIZE: A big word of warning though: these shoes really stretch. Size these guys tightly, otherwise, once broken in, they quickly start to fall apart on edges. You’ll be left swimming in the stretched unlined leather if not fitted a half or whole size down from street shoe size.

The Moccasymm is geared towards climbers who are looking to get the mileage in instead of establishing the worlds next 5.15a. If you don’t mind compromising performance on edging, you’ll be smearing in ease. A word of warning: these dirt bag classics will leave your feet dyed red.

Although my Maccasyms’ have served me well, some say since the acquisition of Five Ten by Adidas, production quality has declined. Take a look at Unparallel’s near identical Up Mocc, a spin off from the original production team.

While we have shared some of our favourites, it’s hard to really pinpoint the best slab climbing shoe. All of the shoes mentioned above are certainly more than capable of improving your slab climbing game.

From no-edge technology to the classic stiff soled designs, all these shoes all require some degree of getting used to. As with any type of climbing shoe, it’ll mostly come down to personal preference and fit.

What is slab climbing anyway?

If you have made it this far though this article without knowing what slab climbing is, you deserve an explanation!

Dynamic moves, toe hooks or lock-offs are non-existent when climbing slab, instead, the user relies on skills such smearing, edging and superior body movement in order to make kickass ascents.

Because of the angle of degree, slabs are usually not trad climbed but a more frequently sport climbed, top-roped or used for bouldering.

If you are looking to take your slab climbing game to the next level, there’s some great tips

What’s the hardest slab climb in the world?

Not only is The Meltdown one of the hardest routes in the UK, it is also considered one of the hardest slab sport climbs in the world. The route was originally bolted in the ‘80s but went unclimbed until James McHaffie made the first ascent in 2012.

Here’s an awesome video of Ignacio Mulero making the second ascent of this super-slippy slab in 2020.

If sloping boulders are more your thing, there’s plenty of those around too. Banshousha in Ogawayama, Japan is probably the hardest slab boulder in the world. It was originally graded a whopping V15, but despite a a downgrade by Nalle Hukkataival to V13, it is still currently one of the hardest boulder slabs out there.

Slab climbing is still pretty undeveloped, so new slab routes are popping up all the time.