The Need For Speed
" 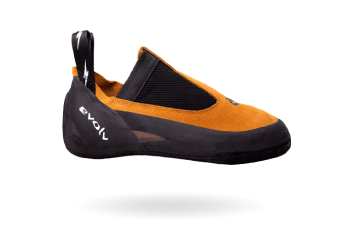 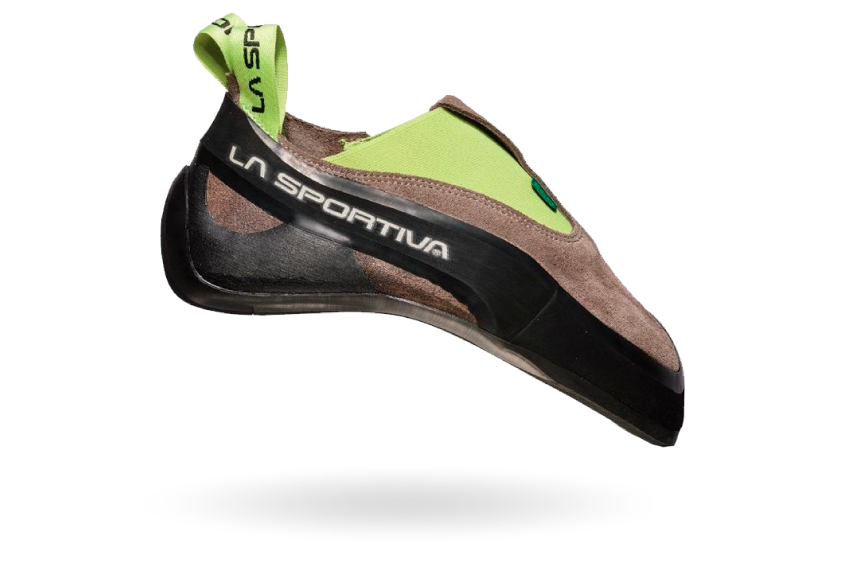 One of the most popular slipper shoes available. Great for training days or laps on the speed wall. 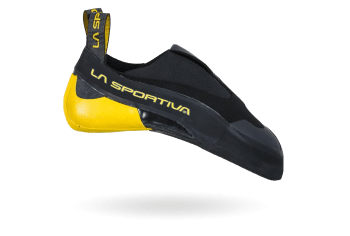 The only shoe purposely built for speed climbing, and the lightest La Sportiva climbing shoe ever.

When most climbers think of our sport, we think of challenging boulder problems, ballerina-like sport climbs, and good ol’ scary trad climbs on which the sport was started.

The origins of speed climbing date back to the 1940s in Russia, where climbers competed head-to-head. Speed climbing was one of the lesser-known discipline of climbing and had long taken a back seat in the climbing world.

After being one of the three climbing disciplines to debut in the Tokyo 2020 Olympics – together with lead sport and bouldering – speed climbing burst into the scene in a big way. With its popularity now poised to skyrocket, speed climbing is here to stay.

According to the official International Federation of Sport Climbing (IFSC) regulations, competition speed climbing is done on 15m artificial walls, with a slight 5-degree overhang and an auto-belay system. Two climbers compete side-by-side against each other, and whoever reaches the top of the route first wins.

Routes are approximately 5.10c or 6b on the French scale in difficulty with identical holds. Timing is done mechanically and is accurate to one-hundredth of a second. A false start is considered a start earlier than one-tenth of a second after the starting bell and is an immediate disqualification.

Because speed is a relatively new entry into the world of competition climbing, currently, there is only one specialized speed climbing shoe available.

While I am sure more specialized speed climbing shoes will be hitting the market in the coming years, here are the shoes currently most used by the pro climbers on the speed wall. 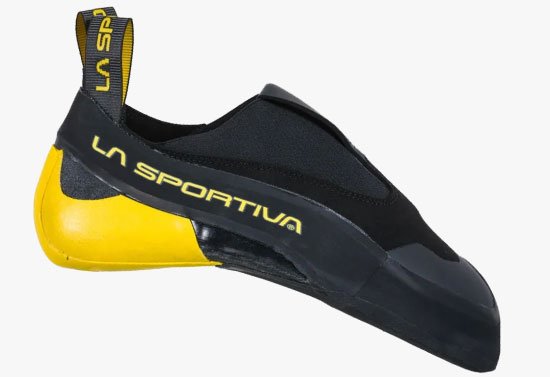 La Sportiva first introduced the world to slipper climbing shoes when they launched the Ballerina in 1984. This type of climbing shoe’s comfort and convenience wasn’t lost on other manufacturers, who also launched several slippered shoes.

La Sportiva now leads the pack again with their 2020 launch of the Cobra 4.99, the first shoe designed specifically for speed climbing.

The Cobra 4.99 is designed to provide maximum speed and is the lightest La Sportiva shoe ever made. A favorite of speedsters, these shoes are used by both the male and female current world record holders, Aleksandra Miroslaw from Poland and Veddriq Leonardo from Indonesia.

The split sole is made up of 3.55mm Vibram Grip XS 2 super sticky rubber, while the heel of the shoe has a minimally constructed design to help cut weight. The toes are protected by a slick TPU patch, that minimizes friction on holds and wall as climbers propel their way up.

The smooth, microfiber upper is breathable and soft against skin abrasions in the feet from constant flexing.

Currently, the Cobra 4.99 is the only purpose-engineered speed climbing shoe. 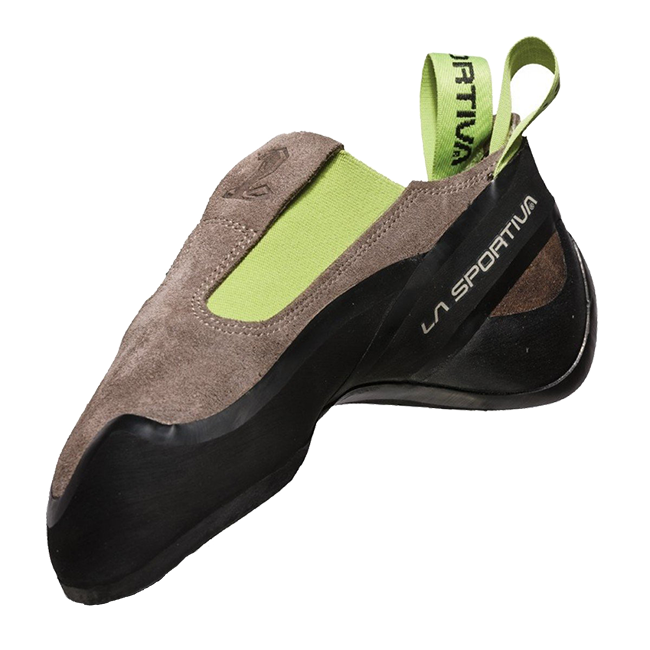 Before the Cobra 4.99 launched in 2020, its predecessor, the Cobra, was the go-to shoe for speed climbers and La Sportiva’s primary slipper. The unlined leather uppers will mold to your feet over time and create a comfortable, custom fit.

In addition, the vegan-friendly Cobra Eco was launched in 2017 and is made from 85% recycled materials. The production of the Cobra Eco version boasts minimal environmental impact with metal-free tanning and water-based adhesives.

Traditional Cobras can still be found on many competition walls, most notably on the feet of Adam Ondra and Reza Alipour.

Unlike the 4.99 version, these shoes can be used for all-day training sessions at the gyms in addition to speed climbing. Professional climbers have been known to wear Cobras on challenging, grit ascents, so you know their comfort doesn’t necessarily come at a sacrifice of performance. 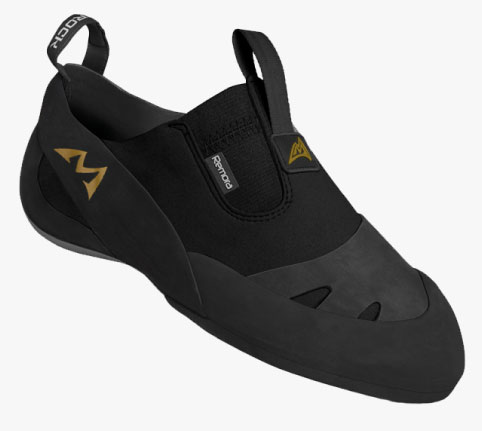 The speed climbing slipper of choice for Mad Rock athletes, the Remora is a vegan shoe designed to be an all-rounder choice for gym climbers. Much like the fish after which the Remora was named, this soft shoe sticks to gym holds unbelievably well.

The flexible upper allows for plenty of flexing while the toe box is roomier than that of the Cobra. This shoe fits comfortably right out of the box, and you might want to size them down for a snugger fit and better performance.

Sad Fact: The Remoras are the go-to speed climbing shoes of two-time French world champion Bassa Mawem who, unfortunately, had to pull out of the finals at Tokyo 2020 due to a total rupture of the lower bicep tendon. 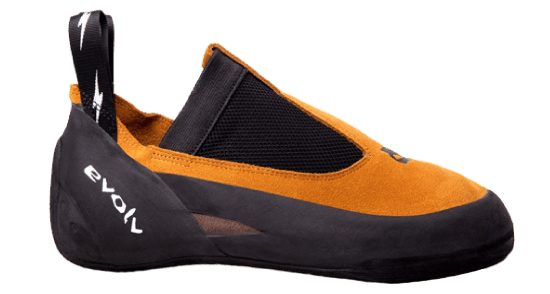 This slipper was updated in 2020 with a new last that has a tighter-fitting heel. The Rave is a slightly higher performance shoe than the popular Evolv Addict.  The 1mm midsole allows for flexion while the sticky Trax outsole is 4.2mm for optimal friction and durability. The outsole is of variable thickness, which means it increases in thickness towards the site of the shoe, helping maintain the shoes sensitivity  and increase edging ability.

Leather uppers will stretch and mould to your feet after the break in process, so might need to be sized down from your street size.

A good speed climbing shoe should be more lightweight than bouldering shoes. They do not need to include the bells and whistles that modern sport climbing shoes require to handle routes of different styles. The repetitive nature of speed climbing makes shoe selection much more straightforward, with weight and friction being the two essential factors.

The favored design for speed climbing is elasticated slip-on shoes with a flexible sole to accommodate for constantly flexing tendons at the front of the foot.

The uppers should be smooth with minimal abrasion against the foot, while the power should be concentrated at the front for maximum upward momentum.

Ready to hit the speed wall?

The slippered shoe design isn’t for everyone. Their soft, flexible construction will not help you send your challenging projects or edge on the tiniest ledges. Nevertheless, when it comes to speed and upward momentum, this style of climbing shoes might just be the thing you need for that elusive 5-second barrier.