The Blanco was the stiffest and most aggressive shoe in the popular, almost legendary, Anasazi line. 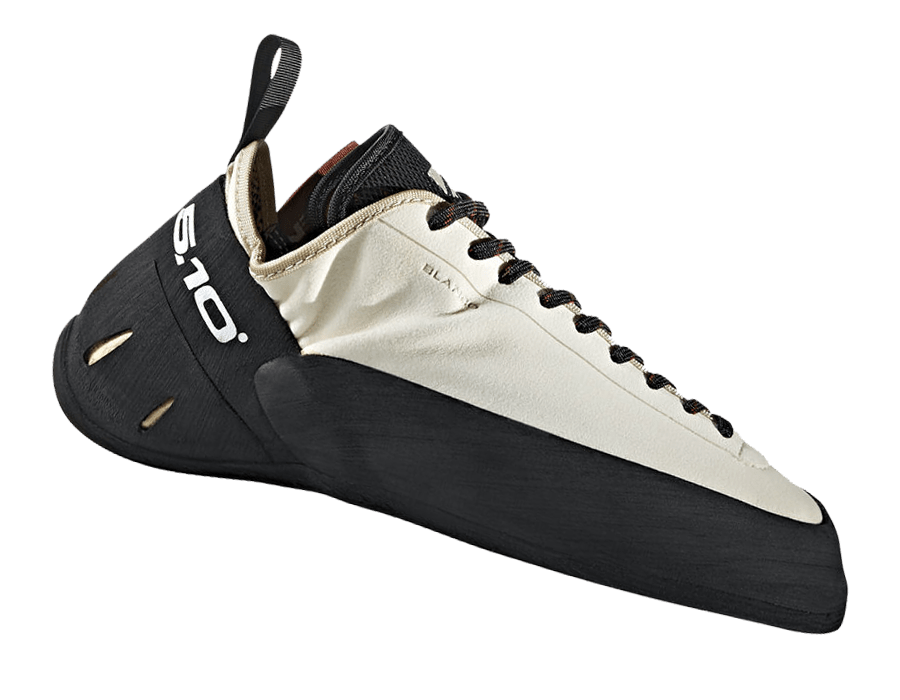 Summary: The Blancos are one of the best shoes in the game for taking on your technical trad and sport projects on limestone, slate and virtullhy any other type of rock you can think of.

The Blanco was the stiffest and most aggressive shoe in the popular, almost legendary, Anasazi line. In fact, Five Ten states that the Blanco is “one of the most powerful edging shoes in the world.” But despite the massive popularity of the Blanco, the Addidas owned manufacturer have discontinued the Blanco, much to the dismay of its loyal followers. After using the Blanco over the years, I would have to agree with Five Tens bold statement. This is certainly an edging behemoth that strikes a perfect balance between a stiff platform and high-friction rubber. The Blanco has become my shoe of choice for projects that involve vertical terrain. The Blancos are so stiff and sticky; I feel like I can stand on anything.  I’ve tested these shoes for almost every climbing discipline. From bouldering and sport to trad and crack, the Blanco can handle almost anything you throw at them. While they can hold there own in the bouldering gym, this wouldn’t be my shoe of choice for smearing up friction slabs or toe hooking through a roof or steep arete. I don’t often use these shoes inside, however, if there’s a particular problem with really tiny edgy footholds and I can’t quite do it, I’ll bring them for the next session, and it often feels much easier. In this Five Ten Anasazi Blanco review, we will take a walk down memory lane and look at some of the features that have made the Blanco a firm favourite of many Five Ten fans.

​The Blanco toe box is slightly asymmetric, almost completely flat, with a fairly rounded toe box. The Blanco’s superior edging ability relies on the user’s weight being pushed forward by the highly tensioned heel rand and the stiffness of the midsole to deliver rigidity and stability. The most recent design uses a thermoplastic midsole which adds to this shoe’s famously stiff platform. Because of these features, the edging performance is fantastic on both the inside and outside of the shoe. The big toe is laser-precise – yet not overly pointed – so performs well on small nubbins and shallow pockets. There’s no doubt, this is a specialized edging shoe, designed for the world of technical vertical climbing.  It’s rare to find a climb that solely relies on edging, so when the time comes to stick a pocket or crack, the Blanco will hold its own, although you might find it slightly uncomfortable. The rubber creeps over the front of the shoe to create a small toe rand to help out on those toe jams and toe hooks. There are certainly better shoes out there for smearing, pockets and cracks (like the Five Ten Hiangles) all of which can be slightly uncomfortable in the Blanco. 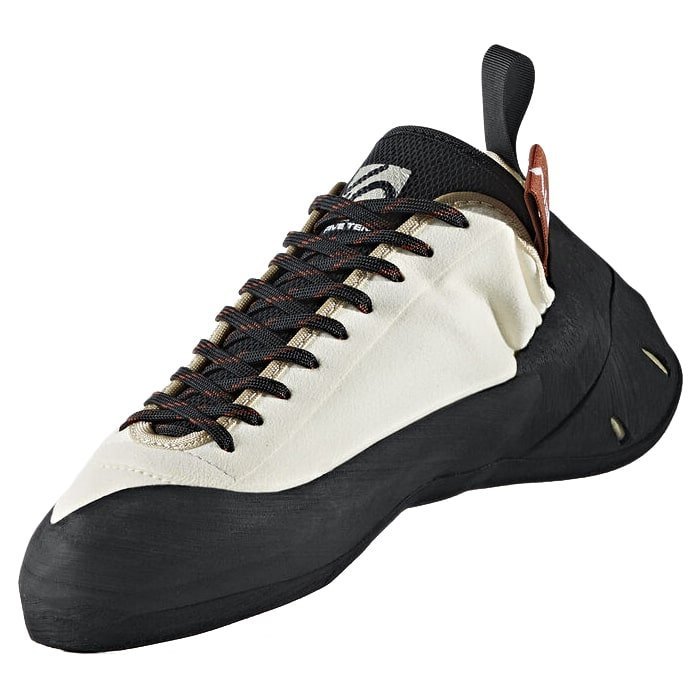 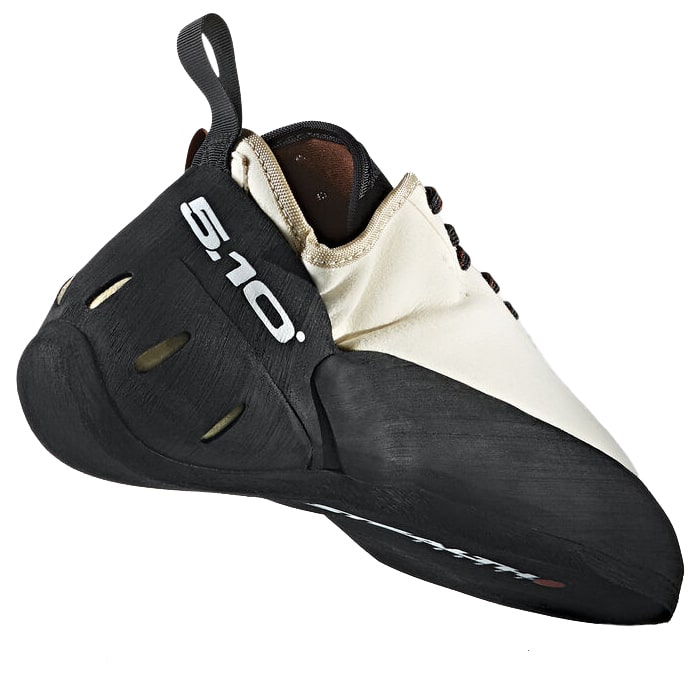 All the Anasazi heels use a tensioned rand, and the Blanco has the most tension of any Anasazi. It is this that makes the Blanco a performance shoe without needing to be downturned. Yes, it can sometimes feel like a battle to get these shoes on, but once your heel is in, it sits surprisingly comfortably in the heel cup. The rand pushes forward on the top of the heel forcing your weight into the toe box and making the shoe perform as well as it does on small holds.  The rand is so good the shoes put up a surprisingly good performance even before they’re laced up. I’m a massive fan of the tensioned rand, but I know plenty of people who aren’t. It’s an acquired taste, so definitely worth trying these shoes on before buying, or finding out if tensioned rands suit you with something with a little less tension first such as the Anasazi pink. Once the heel is held in its cup there’s very little movement when using occasional heel hooks around aretes or tufas, but it can be a little uncomfortable for more prolonged heel hooking.

​The rubber of the outsole is Five Ten’s Stealth C4™. It’s considered 5.10’s most versatile rubber offering “unbeatable grip” which they use on a lot of their climbing and approach shoes. Soft and sticky, with plenty for friction yet durable enough to last several seasons of moderate use and still keep the Blanco’s all-important edge.  Stealth C4™ works well on pretty much all rock types and textured climbing walls. The secret of the Blanco is combining the sticky Stealth C4™ with that stiff midsole, the result is a great stiff edging platform without compromising on stickiness. 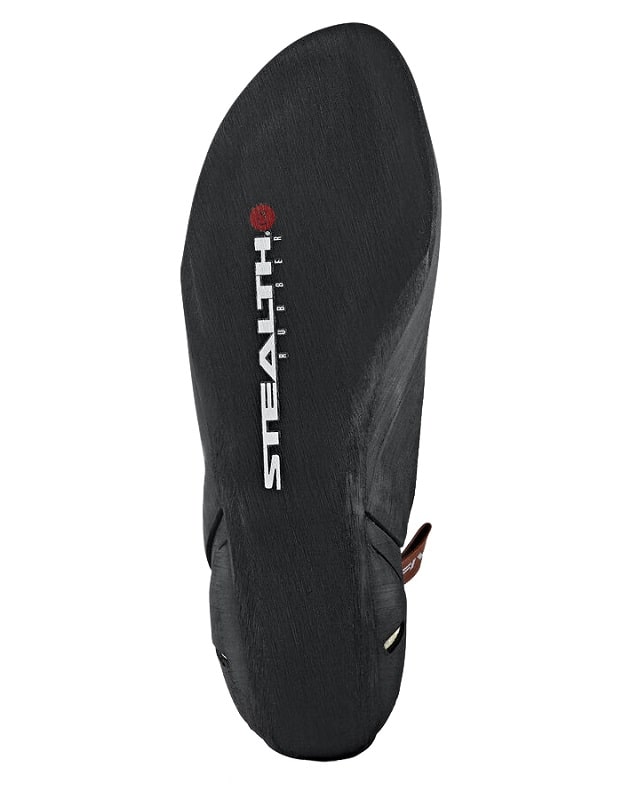 ​Don’t bee fooled, the Blanco might not be downturned or overly aggressive, but this is still a performance shoe. All that stiffness and tension does come at the sacrifice. Some of the sensitivity and quite a bit of comfort are forsaken to give the remarkable edging ability. I will often take them off between boulders, routes or pitches. That said, after several weeks of regular climbing you will find the Blanco will be well broken in and are comfortable enough for longer days out climbing. Having a lace-up shoe helps here too, loosely lased for longer days or you can spend a few minutes getting them super tight for shorter project routes. The laces grip in the eyelets well which really helps with getting them tight and adjusting the lacing to your foot shape a little bit easier too. The Blancos have a synthetic upper so they hardly stretch during the break-in period. I’ve only ever downsized half or one whole size from my Five Ten approach shoe fit. The light mesh tongue is a bonus making the shoe cooler and more comfortable.

Overall, for what the Blanco’s were designed for, I cannot think of any better climbing shoes. Yes, its stiffness does sacrifice some sensitivity and smearing isn’t great. But the Blancos are brilliant for edging and taking on your technical trad and sport climbing projects on limestone, slate, and volcanic mountain crags. I’ve officially joined the army of Blanco fans and, if you can find them, I would absolutely recommend these shoes to an intermediate/advanced outdoor climber looking for a performance shoe that’s versatile enough to use on short walls and for longer days climbing too. I hope you have enjoyed this Five Ten Anasazi Blanco review.  Happy climbing!