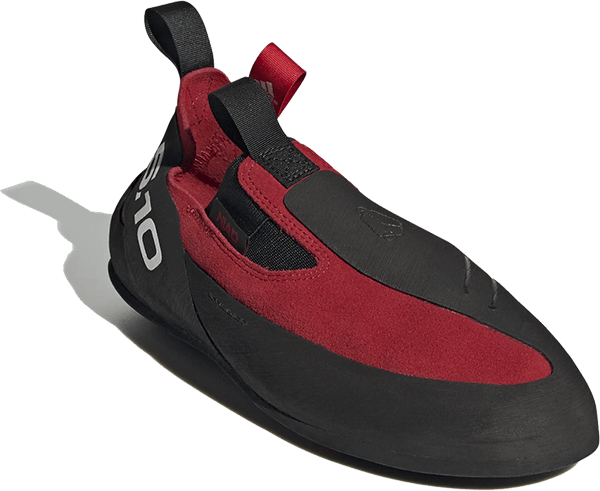 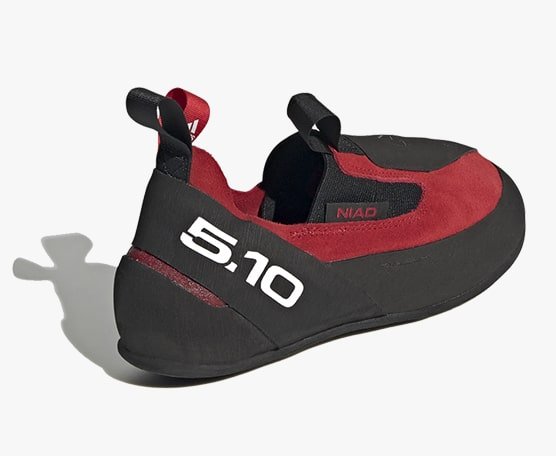 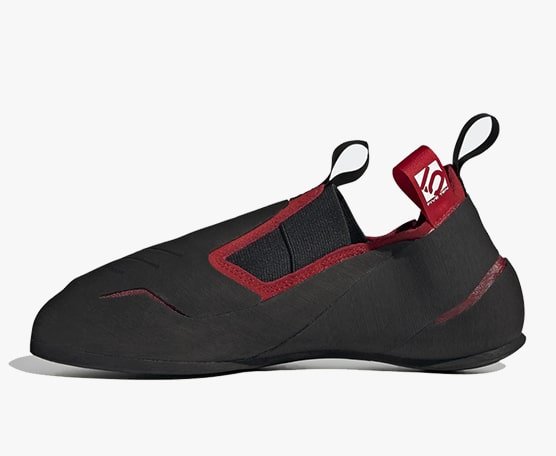 One of Five Tens’ most iconic shoes has received an upgrade for the 2021 season. Built for all-day comfort, without sacrificing performance. 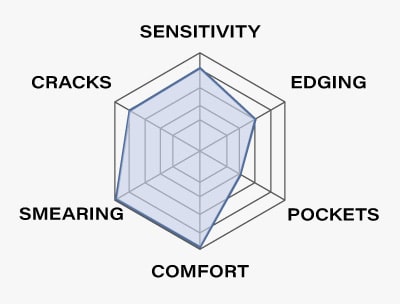 The Five Ten Moccasyam. Undoubtedly one of the most popular slippers ever made. For over 30 years, their iconic red uppers have been jamming cracks in Indian Creek, wrestling boulders in Joshua Tree and hanging off the walls of El Cap.

How has this simple slipper become so popular for such a diverse range of climbing? When it was first let loose in 1992, the Mocc introduced a multitude of game-changing technology. Perhaps most noticeably, it was the first climbing shoe to use an asymmetric last, a design that changed the way climbers used their feet, and opened the door to those illusive 5.14 and 5.15 grades.

This next-generation version builds on the strengths of its predecessor, with the addition of some modern upgrades. The improved heel tension and large toe patch increase overall performance, yet the shoe still maintains the signature comfort Mocc fans know and love. 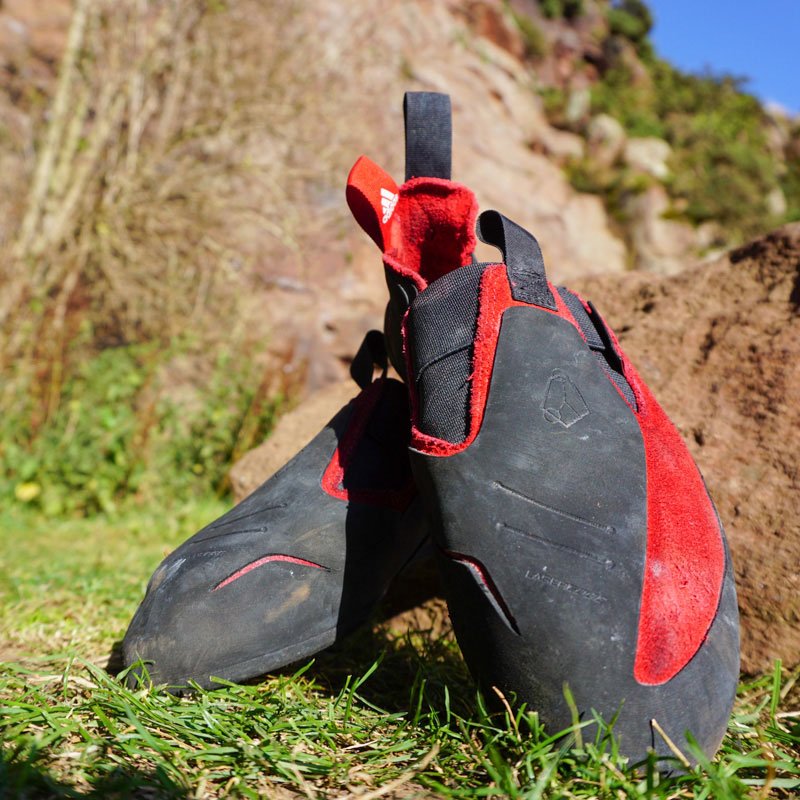 The Five Ten Moccasym is perhaps one of the most versatile climbing shoes ever made. This model has built up a loyal following over the decades and was a favorite of the legendry Dean Potter, who would often run laps on Yosemite’s big walls and attempt daring solo attempts in his trusty Moccs.

Its flat-lasted profile, low volume toe box, and super-sticky STEALTH C4 rubber are just a few of the features that turned this shoe into the crack climbing icon it is today.  It is also a popular choice for gym climbers, thanks to its ridiculously comfortable design, solid all-round performance and their easy-on, easy-off, slipper closure.

Climbing – and shoe technology – has changed a lot since the original Five Ten Moccasym was released, so to keep up, Five Ten have given the Mocc a 21st century upgrade.

Before the die-hard Five Ten fans start to panic, the new Mocc still retains many of the characteristics we know and love from the original model. The shoe is still extremely comfortable, the iconic red upper is still made from unlined leather, and the soft construction still enables the shoe to conform well to cracks and foot jams. I am also happy to report the NIAD Moccasym still inspires confidence on slabs and other friction moves.

There is also plenty of new features to marvel at here too. The upgraded heel and toe box significantly enhance the performance of the shoe, while the new HT (high tear) leather increases the durability of the uppers, a common gripe many climbers had with the classic Mocc.

The Five Ten NIAD Moccasym might not be the highest performing, overhang-crushing shoe you will ever wear, nor is it trying to be.

Instead, the NIAD Moccasym is a serious contender as an all-round workhorse for climbers of all levels. From running laps in the gym, to battling your way up a hand crack – and everything in between – the Moccasyms can do it all. 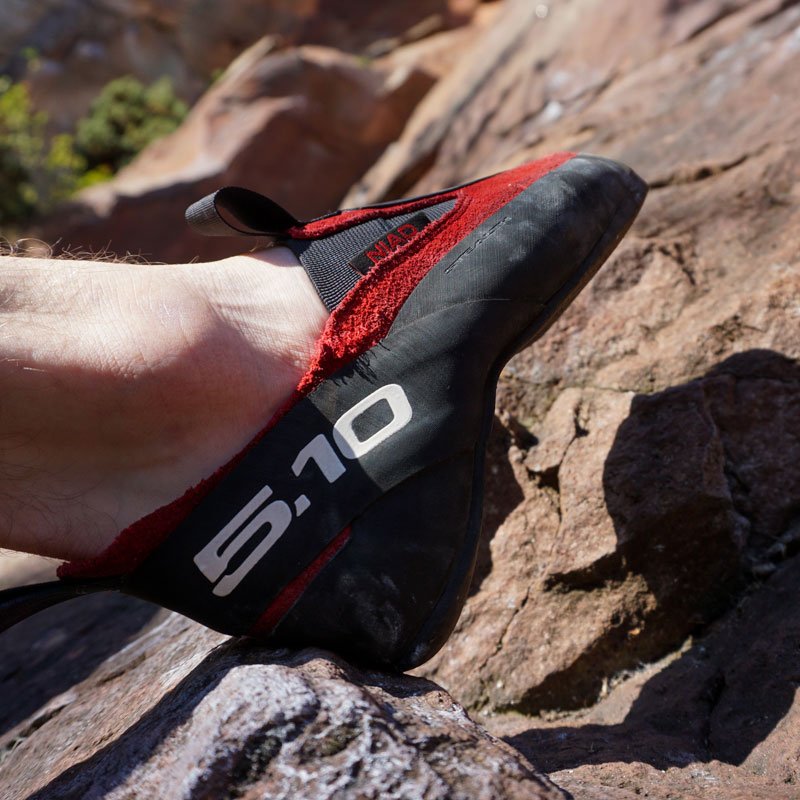 When the Moccasym was first introduced in 1992, the heel design was some seriously revolutionary stuff. Just one year prior, Five Ten had created the first slingshot heel rand and introduced this technology in the Moccasym.

For those that don’t know what a slingshot rand is, it is a piece of rubber that wraps around the back of your heel and around the bottom of the foot, a feature that helps creates tension in the heel. Much like a rubber band, when force is applied to the slingshot rand, the elasticated tension pushes back, keeping your heel securely in the shoe.

Although this was a huge addition to the Mocc in the ’90s, for modern styles of climbing, I find the original Moccasym heel slightly underwhelming, especially for gym bouldering. The classic Mocc doesn’t generate enough tension for significantly pulling on heel hooks, especially once the shoe had been broken in and stretched out.

The heel of the new NIAD Moccasym, however, has received a makeover. The slingshot rand has now been placed on top of the other rand pieces (as opposed to underneath) and now extends noticeably further down the shoe, below the arch of your foot.

Ultimately, this new design significantly improves the tension in the back of the shoe, making heel hooking feel a lot more secure. This new heel also has an impact on the rest of the shoe, driving power to the toe box and enabling greater precision for delicate foot placements.

There is no doubting that the improved heel is a massive addition to the NIAD Mocc. Although the shoe still doesn’t exactly have the most performance-originated heel cup, the ridge on the back of the outsole does create a little feature to hook onto.

We need to address the big rubber elephant in the room. After all, that HUGE toe patch is one of the most striking additions to this next-generation Mocc.

The toe patch is an extension of the rand that stretches to the top of the elastic closure. In my opinion, this is a brilliant addition that plays into the existing strengths of the Moccasym.

For the gym rats and bouldering specialists, it adds a completely new dimension to the Mocc. It opens the shoe up to the wonderful world of toe-hooking, an essential technique in the modern gym climbers’ repertoire. For the crack climbers, it enhances the surface friction of the uppers, especially for hand cracks where the entire forefoot is jammed into the rock. This also helps protect the leather uppers from abrasion, which ultimately, increases the lifespan of the shoe too.

I love a big toe patch. Not only do they look great but they are a really useful tool for bouldering. This additional toe rubber does make the shoe slightly higher volume than the original though, a trade-off that some crack climbers might grumble at.

Edging was never exactly a forte of the original Mocc. The leather uppers were notorious for stretching and softening over time. This did make the shoe ridiculously comfortable, although it didn’t exactly help when it came to providing support for balancing on micro-edges.

The NIAD Mocc, however, is a different story. The new full-length midsole helps keep the shoe rigid, and the addition of the large toe patch reduces the amount of stretch in the leather uppers. As the patch is also a single-piece extension of the rand, it actually helps keep the shoe rigid when weighting your toes.  Let’s not forget all that the extra tension generated from the new heel either, which undoubtedly has a role to play in the improved edging ability of the shoe.

That said, the NIAD Moccasym still probably won’t be my first choice technical face climbing.  If you are looking for an edging monster, then have a look at the NIAD Lace, the stiffest model in the new Five Ten collection. 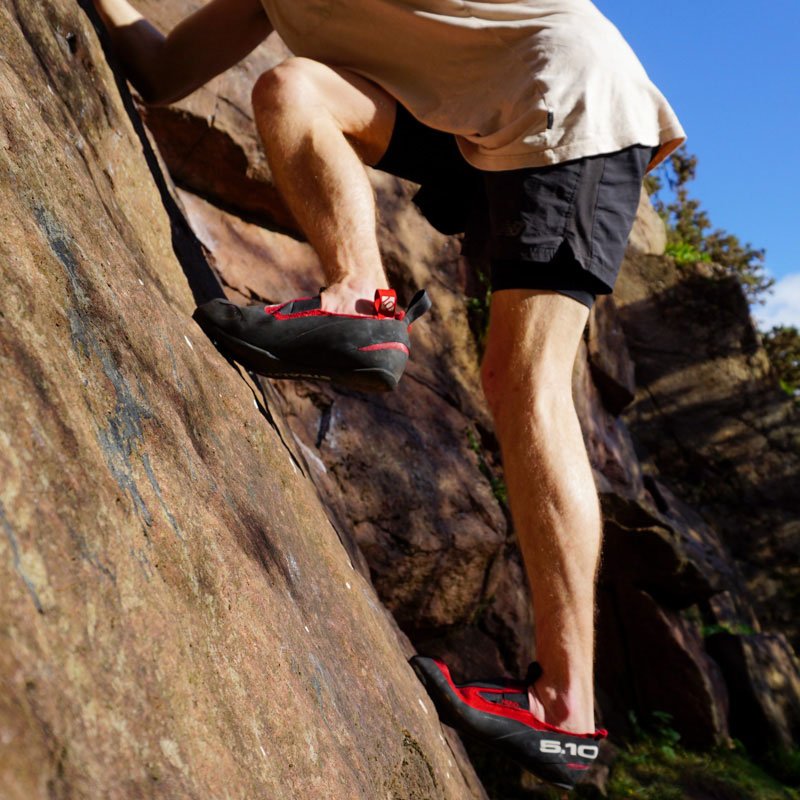 If you have seen our NIAD VCS review, you will know that we were really impressed with its smearing ability. There are no two ways about it, the shoe is a smearing machine. Because the Mocc is the softest shoe in the NIAD range, it takes to smearing and friction moves extremely well. Once the Mocc has been broken in, and the shoe has had a chance to soften up, it is brilliant for smearing on a slabby trad route or inspiring confidence hiking up those big volumes in the gym.  Five Ten’s famous Stealth rubber has a large hand to play in the Mocc stellar smearing ability.  The company have been renowned for their seriously sticky rubber since Charles Cole, the Founder of Five Ten, introduced it to the world in 1985. Stealth has been recognized as one of the highest-friction rubber compounds by various climbing publications and professional athletes. We are big fans of the rubber too, it’s seriously sticky stuff, and has sufficient friction on gym walls as well as most types of rock we have tested it on. It also strikes a good balance between friction and durability, so your shoes won’t be left needing a resole a month down the line.

Pockets and steep climbing is the chink in the Mocc’s armor. Like the rest of the NIAD range, the Mocc has a blunt toe, so honing in on those small pockets isn’t exactly where this shoe excels.

Because the shoe is also built on a neutral last, you don’t get that added benefit of ‘hooking’ pockets on steep terrain like you would with the Five Ten Hiangle or other shoe that have an aggressive camber. 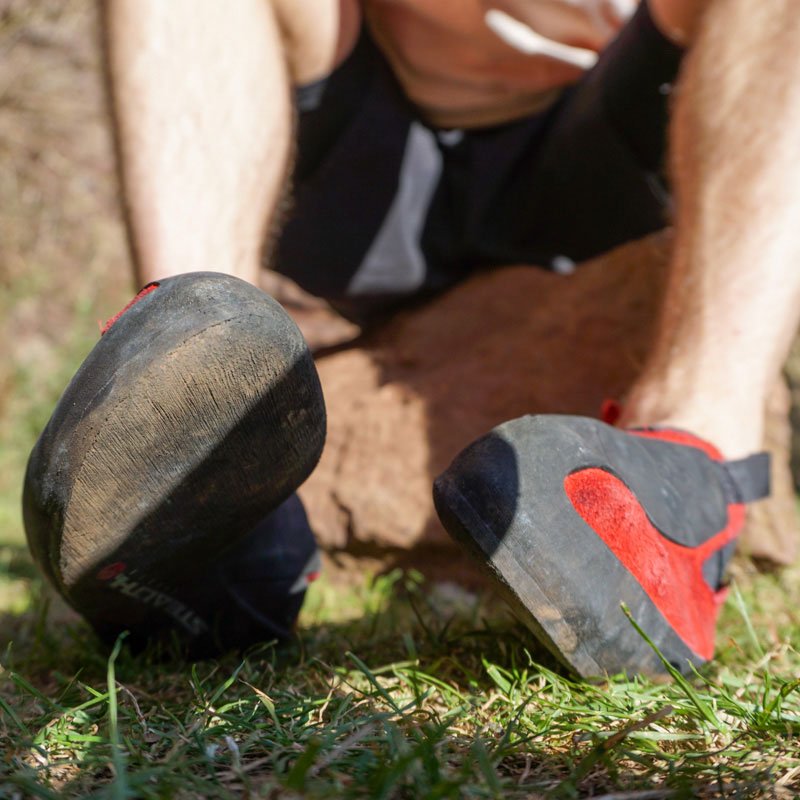 The NIAD Moccasym sizing is different from the original.  With the original Moccs, it was common practice for climbers to considerably downsize the shoe, with some climbers opting to downsize 4 EU sizes from their normal street shoes. For the NIAD Mocc, the additional toe rubber, new leather uppers, and revised heel all reduced the amount the shoe stretches, minimizing the need to drastically downsize. So how should you size the NIAD Moccasym? As with any climbing shoe, the right size ultimately depends on the type of climbing you are doing, how long you will be wearing your shoes, and of course, your own personal preference. If you are hitting the boulders – or trying to squeeze every drop of performance out of them – then you might want to downsize 1 or 2 EU sizes and see how they feel. If you are looking for an all day trad shoe, or just a more relaxed fit, then you might want to start with your street shoe size. Remember, the NIAD Moccs upper is still made from unlined leather, so they will still stretch, just not as much as the original. Fit The new Mocc, like the other NIAD shoes, is pretty narrow, so will naturally suit narrow-footed climbers.  That said, the shoe is remarkably adaptive. I have a wide Egyptian/Roman foot, and once I had broken the shoe in, they felt pretty damn comfortable. 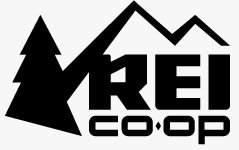