Touted as a favourite by some of La Sportiva’s biggest brand ambassadors and a leader in the No-Edge revolution, the Fututra has changed the way we think about climbing shoes.
Check Price Now 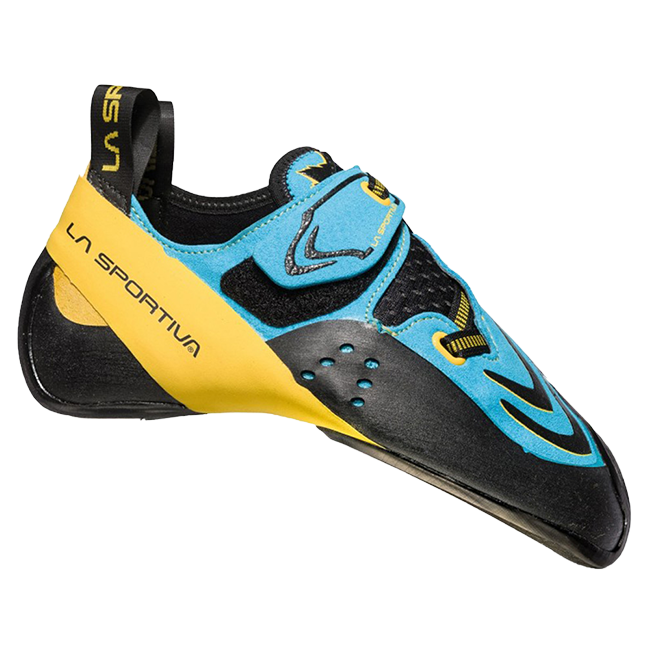 Summary: All that separates you from the rock is a wafer thin slice of Vibram XS Grip 2 rubber, cleverly utilised using La Sportiva’s No Edge technology. The result? An aggressive climbing shoe like no other. The Futura thrives on the edges and pockets of the hardest climbs in the world.

The Futura builds on the success of the ultra-soft, slipper-style Speedster and precedes the masisvely popular Genius. Does this mean it’s essentially just a better Speedster, but an inferior version of the Genius? The answer is a resounding no. This is a shoe I have sworn by for several years now for both bouldering and sport climbing and love the features the Futura brings to the table.

All three No-Edge shoes are distinct, and despite what the price tags might suggest, each holds their own in the right context. The Speedster and the Futura are highly specialised shoes, whereas the Genius does a great job being an all-rounder.

But what even is this mysterious-sounding No-Edge technology I hear you ask? Historically, most manufacturers and gear reviews suggest what you want is some lazer-cut edge, which can stand on a dime, and cut through a block of soft cheese.

Whereas the No-Edge design goes for the complete opposite approach and follows the natural profile of your foot, rather than having a defined edge at the front and sides of the shoe. In place of a conventional edge, a thin layer of rubber is wrapped over the front of the shoe. This maintains a more constant volume throughout the toe box, allowing climbers to be in closer contact with the rock. Theoretically, this provides climbers with greater sensitivity, and improved power transmission, thanks to the ability to apply uniform pressure to footholds over a range of orientations.

Unsurprisingly given their asymmetric last and downturned profile, the Futuras feel at home on steeper problems above pads or on bolts. But the Futura really come alive when onsight climbing, where lack of rehearsal means you’re not using all the holds in the best way. For ambitious trad and sport climbers, No-Edge shoes are an onsighting secret weapon.

The soft midsole of the Futura compliments the No-Edge technology and is particularly valuable on less positive footholds, smears, shallow sloping dishes and padding paste and pray moves. Indoors, this translates to a strangely comfortable climbing experience on the kinds of holds and that most people fear, like awkward volumes, dual texture and sloping holds.

It doesn’t take an eagle eyes reader to notice that the Futuras lack the highly technical modern toe patch present on most performance models. But we all know it’s not about the size but how you use it that counts – am I right ladies? I reality, most toe hook maneuvers outside are much more about body position and toe hooking technique than a matter of rubber real estate. From my experience using the Futura’s on granite and limestone, this toe patch is more than capable of an awesome toe hook or two. Indoor bouldering is, to some extent, a different arena where climbers need a healthy amount of sticky rubber plastered on top of their shoes. But, unless you are regularly climbing world class sets, or can’t get enough of the overhung routes, chances are the Futura toe rand will do the trick. So, if you’re scoffing at the fact that a pair of Futuras don’t have as much rubber as a single Butora Acro, take an afternoon for quiet reflection and decide if you really even toe hook that much. The answer is probably no. The Futura is one the the narrowest shoes La Sportiva make so naturally the toe box is pretty snug. Compared to other popular La Sportiva shoes built for similar intended uses, the Futuras toe box feels lower volume than the Skwama. and is comparable to a Kataki or Katana Lace. It is worth noting, that those who have a ‘Greek foot’, where the long toe (second toe) is longer than the hallux (big toe), will struggle to make any No-Edge shoe work for their feet. 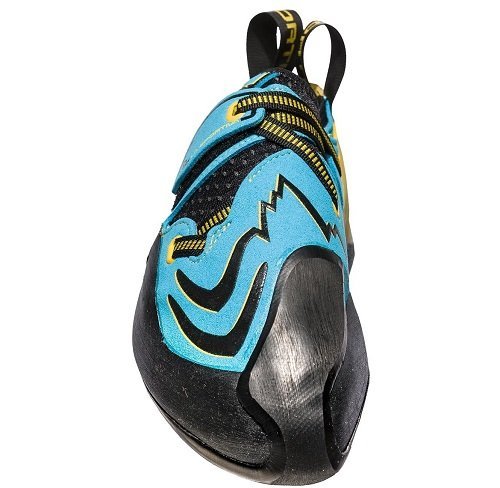 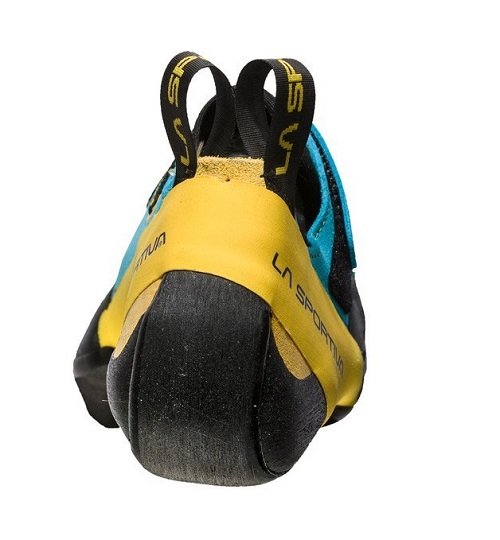 The Futuras feature a fairly basic heel pocket. It is more sensitive than the moulded ball heel on the Solutions, but surprisingly performs just as well. The main nag I have with the Futura’s heel is that it can feel shallow, especially if you have aggressively downsized the shoe. In fact, it does work well enough, but this isn’t hugely confidence-inspiring and doesn’t give you much to work with.   In addition, the Futura heel is surprisingly comfortable out of the box, providing you’re not crack climbing on it. For a high performance shoe this isn’t necessarily a given, it certainly isn’t the case on Scarpa’s Instinct line. Often the heel can take quite a while to soften up before it feels comfortable. This trait is a real plus, given the tolerable comfort level extended by the shoe, especially when looking at the Futura’s long route potential.

The Futura uses Vibram XS Grip 2. The 3mm rubber is amongst the thinnest coatings available, and make the shoe amazingly sensitive. Like any shoe, there will be a break in period, both to soften up the shoe, and wear in the rubber lending you sensitivity and confidence, but this is relatively quick on the Futuras due to the thinner 3mm coating.  The No-Edge toe design cannot be resoled, which is a problem for some climbers who don’t like to cap the lifespan of their shoe with the lifespan of their rubber. However, this gripe is somewhat offset by the fact that the No-Edge design, in theory, will help your rubber last longer than conventional edged designs. But in practice, I have found that No-Edge shoes wear through just as fast as any other shoe would. Although rough alpine granite is a tough arena for any shoe to shine in durability-wise. On a sandstone, or polished limestone, conceivably I could see La Sportiva’s hopeful durability promises, might hold true. 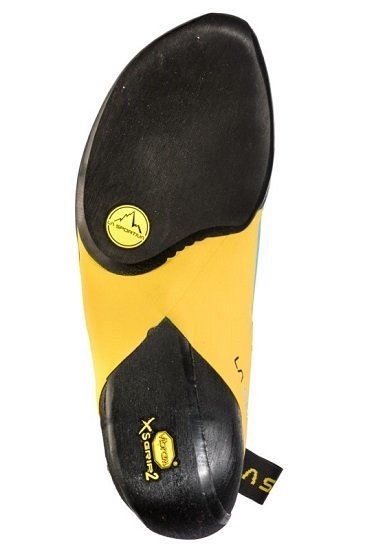 The Futura uses La Sportiva’s PD75 last. Understanding La Sportiva’s last catagorising system can be mystifying at first, but it’s fairly intuitive once you get to grips with it. PD stands for ‘Power Downturn’ and pretty much does what it says on the tin, drives the toe down and concentrates power of the hallux and long toes. The number here (75) represents the degree of asymmetry the shoe is offset by. PD75 is La Sportiva’s second most aggressive last, after the PD85 used on the Genius, Speedster and Testarossa. Although not the most aggressive shoe from La Sportiva, by an industry standard, the Futuras are still pretty aggressive.  Historically, ‘very aggressive’ was synonymous with ‘very uncomfortable’, however in recent years brands seem to tread the line between comfort, performance and fit more easily. Shoes like the Skwama or Instinct series shoes are remarkably comfortable.The Futura is no exception, it’s micro-fibre upper is the same as on the Genius, Solution, Katana Lace and Kataki, and provides a comfortable next to skin feel as well as an almost sock like fitting sensation over the top of the foot. The soft construction throughout the shoe, and the lined-leather build, makes for a shoe which wears in to be very comfortable after a couple of sessions, or ~700 moves. Expect a potential stretch of up to about half a full European size.  Despite it’s overall comfort, the Futura does have one limiting factor which prevents it from being a truly all round shoe which can hack it as a serious contender of long multi-pitch routes. The biggest detraction of all with no edge technology is the fit. In order for the No-Edge technology to work well, or even at all, the shoes have to fit snug. Generally, sizing half a European size down again from your standard La Sportiva size works best. I have tried bending this rule for exceptionally long days. One springs to mind involving climbing ~45 pitches of climbing in a 24hr alpine rock link up, where I chose to size my No-Edge shoes as I would for a standard La Sportiva shoe (42), but I found the performance to be a considerable drop off from a correctly sized No-Edge shoe (41.5), in fact I’d have rather been in my conventionally edged 42 Skwamas.  However, if you really want to wear your No-Edge shoes on a long route chances are you’ll be able to get away with it providing you’re happy not to wear socks, and to keep them on at every belay. Removing shoes at the belay is really not as much of a hassle as many climbers like to make out.  The Fast Lacing System on the Futura is great for getting them on and off in a hurry while still garunteeing a secure fit. It is identical to the Solution’s closure system – and while some climbers find that this lace can break after repeated use – with correct use really shouldn’t, and doesn’t break.

Providing that climbers use them on the right route, the Futuras are a fantastic buy. They don’t quite have the edging power of a Genius, but make up for that with an arguably superior fit for most people’s feet. ‘The right route’ is key though, and not every route is that. Arguably their best virtues are wasted indoors, and you’d be better off saving yourself the cash and getting a pair of soft but resoleable velcro closure slippers like a Python or Instinct SR which will keep your toes strong enough for your outdoor only Futuras without burning that precious 3mm of specially wrapped XS Grip 2.   If you’re considering buying a pair, look at them as your sports car in the garage or your mid-life crisis affair with a co-worker, a load of fun but a bit of a waste for getting to the shops and completely inappropriate for long term companionship. Buy a pair (if they fit), add them to your quiver, and deploy them tactically as and when the time is right. We hope you have enjoyed our La Sportiva Futura review. Happy climbing!